Skip to content
Home Blogs Verruca: Diagnosis, Cause and Treatment

Verruca: Diagnosis, Cause and Treatment 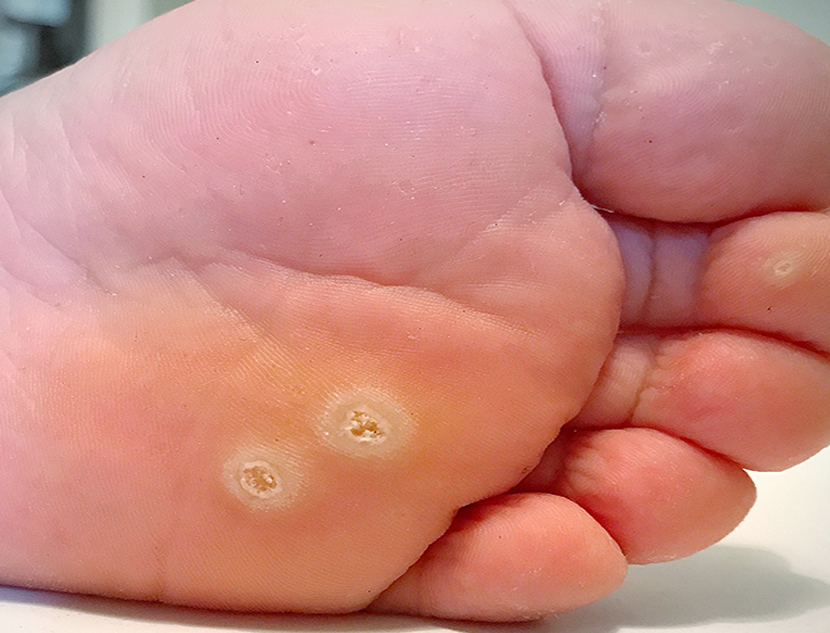 A verruca is a type of wart that grows on the sole of the foot. The wart causes hard skin to form and this can be painful to walk on, often compared to stepping on a needle.

How To Diagnose A Verruca?

Verruca are often recognisable via the following characteristics:

Verrucae may occur either as a single wart or as several warts. Multiple verrucae often form a cluster of small warts around a central larger wart. They can be painful to walk on because the weight of your body forces the verruca to grow inwards.

Patients are sometimes worried by small black dots towards the middle of the verrucae. These are small specks of dry blood and quite common.

How Are Verrucas Caused?

Verrucae are infectious and typically passed on by contact with minute specs of infected skin. The virus enters the body through tiny breaks in the skin surface. Due to this, Verrucae are often passed on in public places such as swimming pools. The virus is not particularly contagious, but measures should be taken to prevent passing on the wart to others, such as:

How Do Verrucas Form?

Verruca causes the area to overgrow and harden; to form localised thickened skin. Due to friction from walking and footwear, these can be aggravated and painful.

How Deep Do Verrucas Go?

Verruca can typically grow up to half an inch in diameter and can be pushed inwards by the weight of your body as they grow, ending up with several millimeters of wart pressing into the foot.

What Does It Mean When A Verruca Bleeds?

Verrucae can start to bleed, often as a result of rubbing or friction after activity or because of footwear. This can be treated as if it were a cut or graze, by:

However, if your verruca bleeds frequently or easily it is best to see a specialist for advice.

How To Remove A Verruca

In the long term verrucae will go away by themselves as your body’s immune system fights the underlying virus. However, this can take a considerable amount of time, with half of verrucae still present after two years. Due to this, patients often seek a speedier way of removing the verrucae.

There is no treatment for verruca that is certain to fully resolve the complaint. However, if one treatment fails another can be tried, to increase the chances of success.

You can buy over-the-counter treatments from your pharmacy, which likely involve gels or ointments containing Salicylic Acid.

In addition to the Home Remedies, there are several more specialised treatments that can be accessed via your GP or a Podiatrist. These include:

How Do You Know When A Verruca Is Dying?

This is generally hard to tell. If you are actively treating the verruca, as it dies it changes colour; the verruca turns black when the blood supply has been cut off.

If you would like to book a consultation to discuss a verruca issue, don’t hesitate to get in touch with our team: