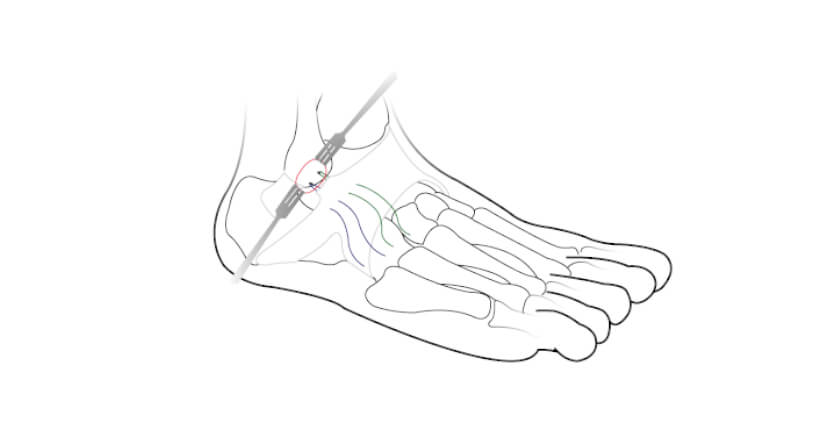 The Brostrom-Gould Ankle Stabilisation is a widely used procedure for treatment of lateral ankle sprains, where the ligament on the outside of your ankle is repaired. This would typically be carried out following a twist or sprain to your ankle where the ligament has become torn or stretched. The stretched or injured ligaments are repaired using an Arthrex Ankle Brace, this allows faster recovery. Key-hole ankle surgery may also be performed to treat subsequent damage to a chronic injury. Following surgery you should be able to mobilise almost immediately with the use of an air cast boot, which you’ll need to wear for the first three weeks. The total recovery takes six – eight weeks. Modern fixation techniques with an internal brace and anchors have allowed surgeons to improve the post operative rehabilitation following ankle ligament repair, allowing predictable recovery and a quicker return to sports.
Ankle impingement can develop in the front or back of the ankle region following a sprain. This is where a bony growth forms which restricts range of motion in the ankle.

Anterior Ankle Impingement, also known as footballer’s ankle, is where the impingement is located at the front of the ankle. Symptoms may include: During the procedure your surgeon will make two small incisions at the site of the impingement, using an arthroscope. They will then identify the thickened tendon or ligament. A small shaver is used to remove any thickened or inflamed tissue, alongside any bone spurs that may be present. Following the surgery you’ll be provided with an ankle splint and crutches to be used over the first one-two weeks. You’ll be able to gradually increase activity during this period. It will take four-six weeks before you can return to normal activities.

The ankle bone (talus) sits on the heel bone (calcaneus), forming a secondary joint in the ankle (the subtalar joint). At the back of the ankle bone there are two small bony lumps (tuberosities), one on the inside and one on the outside. In about 15% of people, the outside lump is naturally separated from the talus, and is called the Os Trigonum. The Os Trigonum can cause problems in people who regularly point their feet downwards sharply, it is most common in ballet dancers. When the Os Trigonum gets pressed between the bottom edge of the shinbone (tibia) and the top surface of the heel bone, the tissues above and below the Os Trigonum can become trapped, leading to inflammation and swelling. The Os Trigonum can be removed through a small incision at the back of the ankle. Typically you will require rest at home for non manual jobs, where you will use a back slab and crutches.
​