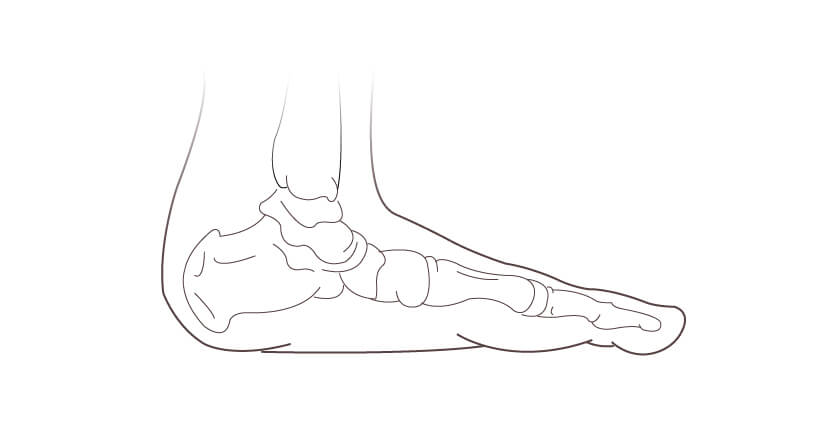 The HyProCure procedure is minimally invasive with the use of a stent. The procedure is carried out to reduce pain and to realign the foot and correct a flexible flat foot. The procedure is carried out for flexible flat feet when there is no indication of arthritis and typically in younger patients. The HyProCure procedure is carried out one foot at a time.Your foot surgeon will make a small incision (8-10mm) over the outer side of your foot/ ankle. A small stent is placed into the canal (sinus tarsi), which stops the foot from collapsing. You should rest at home for one-two weeks following the procedure. Light exercise can start from six weeks but high impact should not be carried out until three months following the procedure. This procedure is sometimes carried out alongside a gastrocnemius recession.
Patients with flat feet can have the heel bone shifted too far to the outside. The purpose of the calcaneal osteotomy is to realign the calcaneus (heel bone) with your tibia (shin bone), it allows the heel bone (calcaneus) to sit directly underneath the midline of the leg.An incision is made to the outer side of your heel bone. A bone cut is made along the heel bone and then the back section is aligned and fixed into position with surgical screws and/or a plate. Following the surgery you will be placed in a cast to wear for 4 – 6 weeks, this will be followed by the use of an Aircast boot for a further 2 – 4 weeks. A return to sports can take up to 6 months. This procedure may be arranged alongside additional surgeries, such as the tendon transfer, gastrocnemius recession and midfoot fusion.
Tendon Transfer can be carried out for both flat foot, high arched foot, unstable ankles and drop foot.As part of a flat foot corrective procedure, the damaged posterior tibial tendon, which attaches the muscle in the inner calf muscle to the bone on the inner side of your foot, is replaced by a transfer of the flexor digitorum longus tendon, which is found on the inner side of your leg. For dropped foot and high arched feet with unstable ankles, a range of tendon transfers are performed dependent on case by case. As part of the flat foot correction when the tibialis posterior tendon fails, an incision is made from the inner ankle so both tendons are exposed. The damaged section of the posterior tibial tendon is removed and replaced with a section of the flexor digitorum longus tendon, this is then sutured into place. The procedure is often carried out alongside a calcaneal osteotomy, gastrocnemius recession or midfoot fusion. You will require a cast for the first two weeks and will then start to use an Aircast boot for a further four weeks. At two weeks postoperative you should be able to return to sedentary work. Return to sports typically takes 6 months.
A midfoot fusion may be suggested to correct flat foot deformity or due to midfoot arthritis affecting the joints. This is carried out when the midfoot has collapsed in flat foot deformity, often the rearfoot is still well positioned or may also need alignment. The affected joints are fused and arch is raised.One – three incisions are made at the top and inner side of the foot. Fixations, such as screws, are used to fuse the joints together. You should rest at home for two-four weeks following surgery. Initially you will require a splint for the first two weeks, this will be followed by four weeks in a cast and then the use of an Aircast boot for a further four weeks. This procedure may be carried out alongside additional surgery, such as the gastrocnemius recession, tendon transfer or calcaneal osteotomy.
​